About 70 people came out to orienteer today. Seventeen brave souls tried out the Capture the Flags game. Alex Shaffer, orienteering for the second time ever, had a blazing fast time on the white course: 4 minutes and 20 seconds. There were several folks new to orienteering. We advertised on the Arlington parents' email list and on the Friends of Menotomy Park website, as well as on Cambridge's Graham and Parks school parent email list. We had some new Graham and Parks families, which was great!

Thanks to Jim Paschetto for helping to set up, running the Finish, cleaning up, handling the financial reporting, and managing the electronic punch equipment. Thanks to all the meet helpers: Bill Bryant, Isabel Bryant, Becca Shaffer, Alex Shaffer, David Bryant, Richard Shapiro, Leah Williams, Bill Binette, Kristin Hall, Andy McIlvaine and Dave Yee. You were a pleasure to work with! 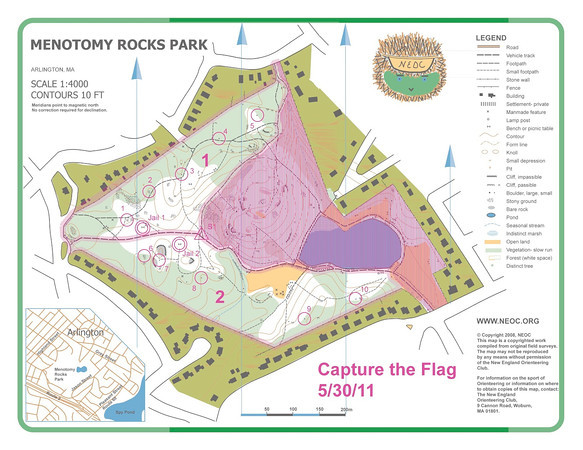 The special event of the day was an orienteering version of Capture the Flag, in which 17 people took part, with ages ranging from below 10 to above 40. Teams had to retrieve 5 flags from enemy territory without being tagged. If you did get tagged, you had to return the flag (if you were carrying it) to its starting location, and go to jail until one of your teammates came to rescue you. The territories and the flags and the jails were pre-marked on the map. Teams had 10 minutes to discuss strategy before the start of the game. To win, a team had to collect all the flags and gather with all their teammates at the start. Team #1 got all their flags first, but had trouble collecting their team members, and team #2 ended up winning. Total time for the game, once it started, was about 40 minutes. 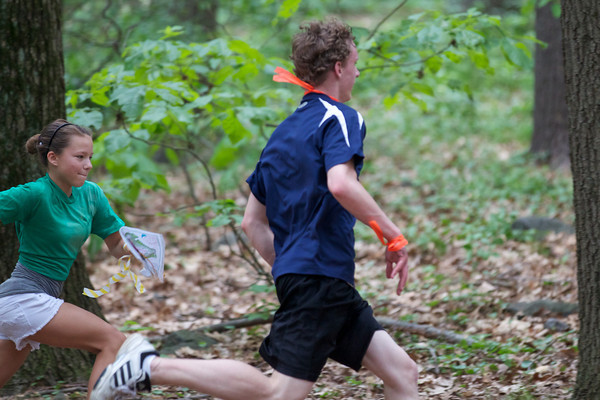 We had been struggling to attract juniors to our junior training events, so this time we focused on making it fun, playing in teams, and opening it up to all ages. I loved seeing kids, who hadn't known each other 10 minutes before, conferring about strategy with each other over a map. 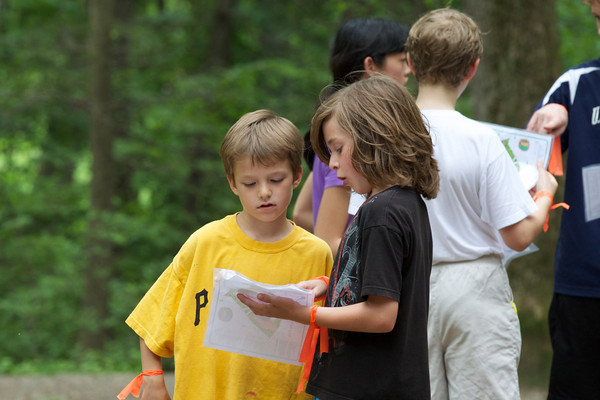 Use RouteGadget (in the "Results" menu above) to draw your route and see others' routes.

Photos from the day are in the Galleries.

Orienteering is powered by enthusiasm and hard some work.

Thanks to everyone who has invested their time and effort in the club.
Contact a meet director or Board member if you're interested in helping out.
NEOC is an all-volunteer organization.