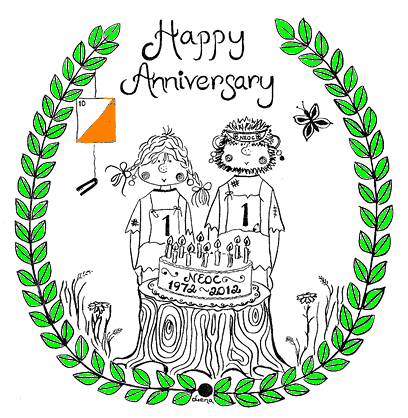 Hans Bengtsson, NEOC's first President, described the birth of the club in a booklet assembled for its 10th Anniversary. [Original artwork by Lena Bengtsson]

As we finish our tenth year of official existence, perhaps many of our current members wonder how NEOC started. I'll try to satisfy your curiosity a bit.

In a sense, the time had come and all the needed ingredients happened to be available and get together.

First, we definitely have here in New England the terrain and the woods that are ideal for orienteering. Quite penetrable forests in a good supply, and very interesting, formerly glaciated land of a suitable hilliness. The retreating ice left loads of exciting details behind - boulders, exposed cliffs, and intricate topography with lots of small draws and knolls. Perfect for 0'. And in addition a climate that lends itself very well to active outdoor recreation most of the year.

Further, the time and area was right. An awareness of the benefits of an active life has probably been around here for a long time, but outdoor sports really took off in the 70's. Hiking and XC skiing had booms. And the population of New England also has a record of having an open mind ready to try something new - like orienteering.

Finally, the right persons happened to get together - each with some orienteering background and a true interest in the outdoors. 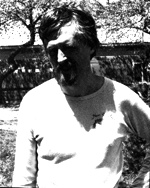 I came to the Boston area in 1969 with a background in orienteering dating back to my early teens, both as a competitor and as a leader. I got my upbringing at Tockarps IK (Athletic Club) in southern Sweden and later belonged to SOIK Hellas (Swim and Athletic Club) in Stockholm for many years.

After having gotten settled here a bit, I tried to find out if any orienteering was done in the area and via Bjorn Kjellstrom of Pound Ridge, N.Y., I found out about some Canadian activities, and also about a meet in Carbondale, Illinois, in the fall of 1970 called the 1st U.S. Orienteering Championships. Bjorn, by the way, is one of the founders of the Silva company and had long promoted orienteering in the U.S. and Canada. He'd had only limited success, with the exception of in Canada the previous couple of years.

Anyhow, I attended the Carbondale meet (where I bombed out!) and some Canadian meets. Up there I ran into Tom Pelnar, a Montrealer studying at Brown University in Rhode Island. it turned out that Tom had already organized some orienteering around Boston (in Estabrook Woods in Concord). He also told me about some mapping attempts in Boxford by a Norwegian, Harald Wilby, who had resided in the area for a short time and who was instrumental in starting the Deleware Valley club.

Through XC skiing I also got involved in the Eastern Ski Association, where I ran across an instructor named Bob Remsdall from the Sterling School at Craftsbury Common, Vermont. I supplied him with the basics, and he put on a ski-O' meet at Sterling on March 28, 1971.

Having been involved in a similar organization back in Sweden, I also soon became active in the Appalachian Mountain Club. Through the AMC's Bulletin a meet was announced for June 6, 1971, at Blue Hills' Houghton Pond area. It drew 20 participants. The winner was Tom Pelnar, with Ron Gallagher, Dale Cook, Gordon Spencer, and Dave Hammer among the runner-ups - names which we still find in our membership roster.

Later in 1971 I got contacted by Bill Osgood of Goddard College in Plainfield, Vermont, where we held a clinic during the summer. In the fall Tom and I set up another Houghton Pond meet and we also ran a clinic up at AMC's Pinkham Notch area in New Hampshire. (Didn't you get introduced to orienteering there, Ruth Johnson?)

The same fall the 1st North American Championships were held in the Prince William Forest Park area near Quantico, Virginia. There I bumped into a New Englander, Peter Reynolds, who had done some orienteering in the Army. Peter got excited to hear that we now had some orienteering going around Boston, and he said that he had to tell his old childhood friend from Hingham, George Atkinson, about this.

Peter must have done this right, because when I met George for the first time, together with Peter and girlfriends Meredith Owen and Lena Andree, at Charlie's Kitchen in Cambridge we decided to form a club. This was mainly so we could join the U.S. Orienteering Federation as a charter club (it had been formed in August of 1971). For a name we chose New England Orienteering Club since we already had close connections in Vermont, New Hampshire, and Rhode Island besides Massachusetts. I rounded up some more names among orienteering and skiing friends to get the 10 required to file the application with USOF. Among them several are members 10 years later: Lena (now) Bengtsson, Meredith (now) Atkinson, Dale Cook, Mark Olsen, Tom Jahn, and Adolf Jochnick, besides George and me. The club founding was announced in a NEOC newsletter dated April 27, 1972, and it says that the membership fee is $5.00 - the same as today!

Peter and I later attended the first Annual Convention of USOF on April 15, 1972, at Quantico, Virginia. There it was announced that we were a charter club together with: Southeastern Ohio OC, University of Dayton Rangers (Ohio), Trojan OC (Ft. Bragg, N.C.), and Quantico OC (Va.) - SEOOC and QOC are still active besides us.

One question raised there was where to hold the next U.S. Championships. Bjorn explained that he had a good 0' map over his back yard in Pound Ridge, N.Y., but no organizers. In a moment of foggy thinking, Peter and I said that we could take care of that detail. So we organized our first Class A meet and our first Championships on October 14-15, 1972, with George, Peter, and me as the key people.

Now we had gotten things rolling, and indeed, it has been rolling pretty good ever since. But a couple of highlights are worth pointing out. In 1974 we initiated our first color 0' map project, sponsored by Silva and Bjorn Kjellstrom. The map was used for the North American Championships in 1975 at Bear Brook State Park in New Hampshire. The same year we had a big jump in attendance as a result of Skip Knuttgen's reorganization of the meet scheduling with dates set and announced a long time in advance, and more meets too, of course.

So that is the story of our early, quite spontaneous, orienteering years. We have made big strides forward since then thanks to hard work by all involved.

And now get out there and enjoy one of our meets!

Contact a Meet Director or Board member.
NEOC is an all-volunteer organization.