The park is typical glaciated New England terrain consisting of major ridges and the valleys between them, but rock features are concentrated in certain bands. The forest is 60% white woods, 10% light green, and 30% medium green. 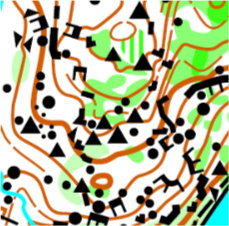 The map has 5m contours derived from public LiDAR.

Courses printed at the following scales:

Field-checking and drafting by Carl Underwood in autumn 2020. Map is compliant with current IOF mapping guidelines (ISOM 2017-2). OCAD and Karttapullautin were used to interpret LiDAR data, and aerial imagery was also helpful to finish the base map.

Maps will be printed on premium paper by commercial digital color laser printing.

The map has a diverse assortment of terrain. Orienteers will pass through old growth hemlock forest, and younger hardwood forest. When moving between hillsides there will be a noticeable difference in quantity and size of boulders. Due to this each hillside has subtle differences in how they were mapped. Areas with fewer boulders were mapped to include boulders measuring about 1 meter, to ISOM standard. Areas with more boulders were mapped more sparingly. Smaller boulders were left unmapped, or generalized into a boulder field. When navigating with boulders in the old growth forest, keep in mind that many boulders are covered with moss and vegetative debris, making them harder to distinguish from a distance. On the steep hillsides some boulders are not as visible from the uphill side, but I could not justify mapping them as cliffs.

When navigating off-trail, do not fully rely on trail blazes to locate yourself. While mapping the western side of the map I found two areas where there were blazes on trees, but no recognizable trail on the ground. There were no remnants of an indistinct trail on the ground, and therefore were not mapped.

Most of the map was made during a very dry period. Many streams, even the larger crossable streams were not flowing. I tried to accommodate for this when mapping streams and marshes. Be aware that if competing after a period of consistent precipitation there may be some small indistinct marches or vernal pools that are not found on the map.

Bigelow Hollow State Park / Nipmuck State Forest is similar to Wells State Park, nearby in Massachusetts, which was used for previous national ranking events. Previous courses at Wells SP are available for review on Routegadget on the NEOC website.

Do you see ways to improve the club?

Contact a Meet Director or Board member, and help make a difference.
NEOC is an all-volunteer organization.